Heard It with My Eyes 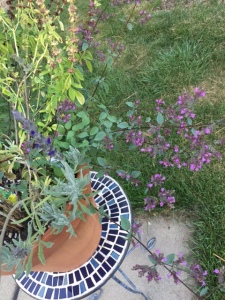 I’m going to do it. I’m going to blog about my plants again. I didn’t think that I was that person. The person who talks about their plants….

Wait, that person, doesn’t exist. Plants aren’t exciting enough to blog about twice. But yet, I’m about to blog about my plants for a second time within a matter of a month.

Proof that God can use whatever the heck He wants, to teach us something.

I like to save things. Random things, my old things – just EVERYTHING. Little notes, trinkets, containers, old shoes… those pants I’d like to fit into again some day. I hold onto them. And most times I think I will use them again. I really NEED to keep this thing for some mind-blowing, life altering event in the future.

But I’m afraid that some [read: most] of my saving is just useless. I’m probably never going to use that silly pickle jar for something else. Or those teal colored coffee bags sitting in my craft box will NOT BE RE-PURPOSED in a craft. Those pants are ready for the thrift store. [Sorry, those capital letters were so that I would actually read this and learn from my own writing].

We need to use things, or just get rid of them. Give them to someone who could use it, or just recycle it, throw it in the garbage – get the clutter out. Storing up things for later – isn’t doing much good for us now.

So back to my plants. I potted a little herb garden in the beginning of the summer; basil, rosemary, oregano, lavender, and cilantro. The herbs were doing great for a couple months. We used them in many meals and the little potted herb garden was just flourishing. But then we got busy. We weren’t cooking as much at home. I totally forgot that we had fresh herbs by the front door, and I honestly just thought, I’ll just let the herbs grow and save them for later.

Turns out – herbs don’t work that way. Nature has this way of allowing the plant to do it’s thing. It’s produces an herb that is supposed to be used. And if it’s not given some sort of purpose – it starts to die and re-seed. It’s original purpose of being this delicious herb used to flavor wonderfully tasting meals – was lost. So I was saving up my herbs for nothing. Now they all have little flowers at the end. They could be replanted and given another chance – but the herbs just stopped producing. No more basil leaves. The oregano leaves have flowers on them. I can’t store them up for later. Because later – they aren’t what they once were.

Maybe it seems like a silly parallel – but God has been working on me and materialism. He’s breaking me of loving earthly things and letting them rule me. And He decided to use plants to try and drive this issue home into my heart. Storing up things on earth won’t bring him glory. Give things away, let them be a blessing to others. He will provide more when the timing is right.

“Therefore we do not lose heart. Though outwardly we are wasting away, yet inwardly we are being renewed day by day. For our light and momentary troubles are achieving for us an eternal glory that far outweighs them all. So we fix our eyes not on what is seen, but on what is unseen, since what is seen is temporary, but what is unseen is eternal.” – 2 Corinthians 4:16-18

I need to give my stuff away. My time, extra blessing, extra things. They weren’t mine in the first place. I want to keep the original purpose that God gave me. A vessel of blessing.

One thought on “Oregano flowers”